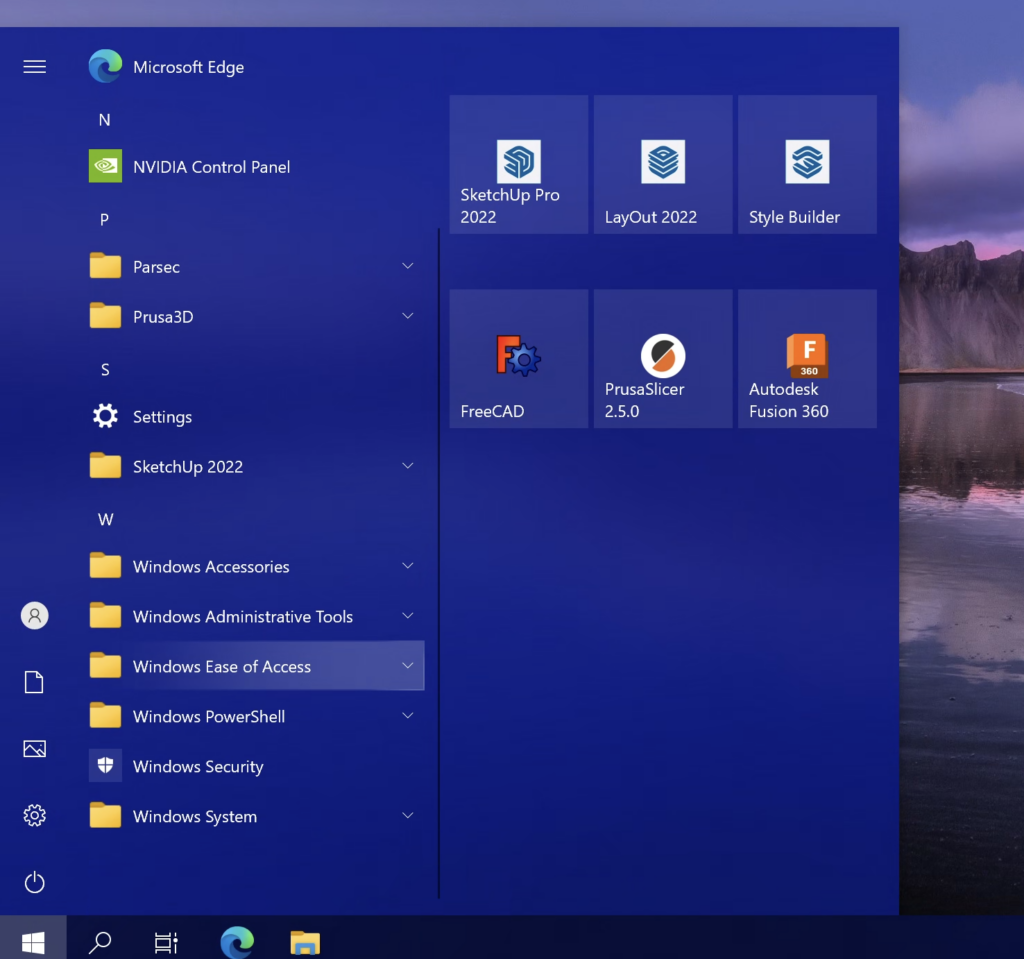 Recently, I had to set up a Windows 10 computer for one specific application in a semi-embedded use case. Anything else that Windows does or comes with is unnecessary for this. While there are plenty of internet scripts and apps for de-bloating Windows, I have found the easiest (and little known) way to debloat Windows without running any internet scripts is as follows:

This is my Start Menu, after installing my CAD software:

After running the command, you will just have the Windows folders, Microsoft Edge, and Settings. And that’s literally it – no Microsoft Store, no Apps, just Windows and a Web Browser. Also, even though the command sounds extreme, almost nothing in Windows actually breaks after you run it (Windows Search, Timeline, Action Center, all work fine)*. If you want to try it yourself, I’d advise using a virtual machine and giving it a try, it works shockingly well for my use case.

After that, if I want to further de-bloat a PC for an embedded use case, I use Edit Group Policy on Windows 10 Pro. It’s a mess to navigate, but almost everything can be found there. Don’t want Windows Search to use the internet? Or something niche, like disabling Windows Error reporting? It’s almost certainly there.

Will this work for everyone? No, of course not, but it’s a great one-line, easily memorable tool for cleaning up a PC quickly for an industrial use case without any security risks caused by online scripts.

Q. What about .NET Frameworks, VCLibs, and some other important-sounding packages?

A. This will remove them, but despite their important-sounding names, they aren’t as important as you may think. The .NET packages (in Appx, not to be confused with the unpackaged “classic” .NET Frameworks) and VCLibs in my experience are primarily for Microsoft Store applications and Desktop Converter Bridge applications (Win32 in Store package), which if you don’t have the Store, probably won’t affect you. (This may sound optimistic, I say probably because I can’t try every application, but if Steam, FreeCAD, and Fusion 360 can run without issue, you’ll probably not have issues.) Try in a Virtual Machine or old computer first if this is concerning.

A. Technically yes, but it’s hard. Reinstalling Windows is easier. Plan accordingly. Actually, you can, with this command in a PowerShell Administrator window according to Microsoft documents: Get-AppxPackage -allusers | foreach {Add-AppxPackage -register "$($_.InstallLocation)appxmanifest.xml" -DisableDevelopmentMode}. I still recommend using a VM first just in case and only using a fresh install. After running this reinstall command, get updates through the Microsoft Store, and restart. This should work and in my testing it does, but the Weather app was complaining about Edge WebView2 being missing (but provided download links).

Q. But it might rip out XYZ which I need (e.g. Microsoft Store).

A. I recommend, in that case, using a VM first or an old computer to see if you actually need it.

A. Most likely not, and actually, likely less than if you didn’t de-bloat (lower attack surface). You will lose many libraries used for primarily running Windows Store apps (and the apps themselves), but Windows Update and Windows Defender are not affected by the command in any way I can discern. YMMV though.

A. It’s the risk we all take whenever attempting to de-bloat Windows in any way Microsoft doesn’t sanction (the risk comes with the territory). But if you are still interested in de-bloating, I think that it’s good to have an option that doesn’t need downloads. There might be downloadable options that are better.

Q. But what about the Chris Titus Tech debloater, or O&O AppBuster?

A. They’re probably great solutions. The main appeal of this one is that it is memorable, can be used immediately, and requires no downloads. If you are OK with downloading scripts from the internet (which, I am, but not everyone is), there are great, more granular options out there. Because of the requirement of a download, I don’t see them as being comparable to this command (different use cases).