Modeling my Grandpa with 3D Photogrammetry 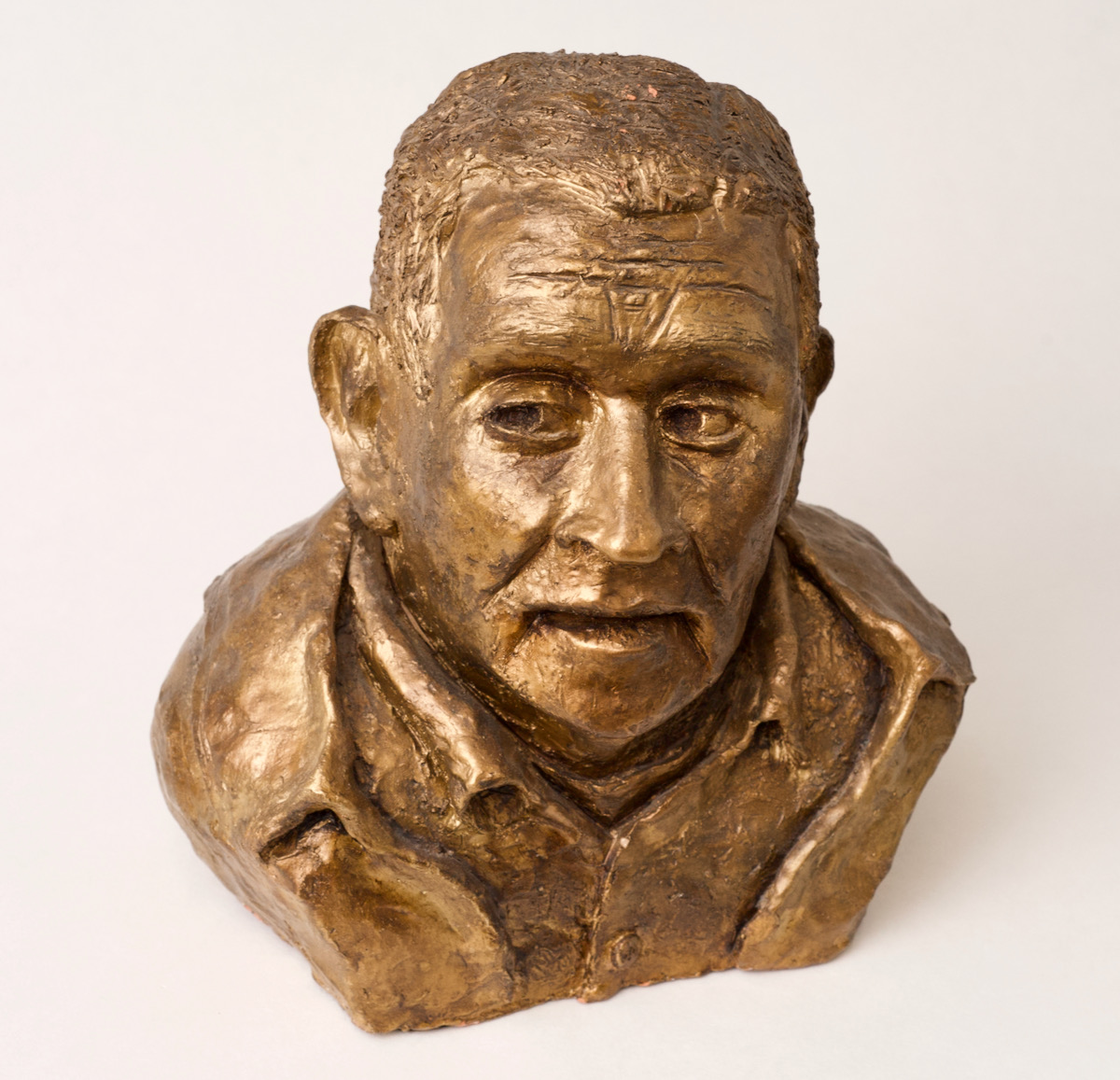 Today I released a video about how—and why—I 3D Printed my Grandpa and put him on my bottle of ketchup. Watch it here.

I sculpted a bust of my Grandpa in high school, gave it to my grandparents, got it back after he died and my Grandma moved out of her house (I wrote a tribute to my ‘Grandpa Charlie’), and I kept on moving it around my office because I didn’t have room for it:

I decided it had to go, but asked my extended family if anyone wanted the statue (thinking it would be sad to destroy it). One enterprising cousin suggested he could ‘copy’ the statue in smaller form using photogrammetry: 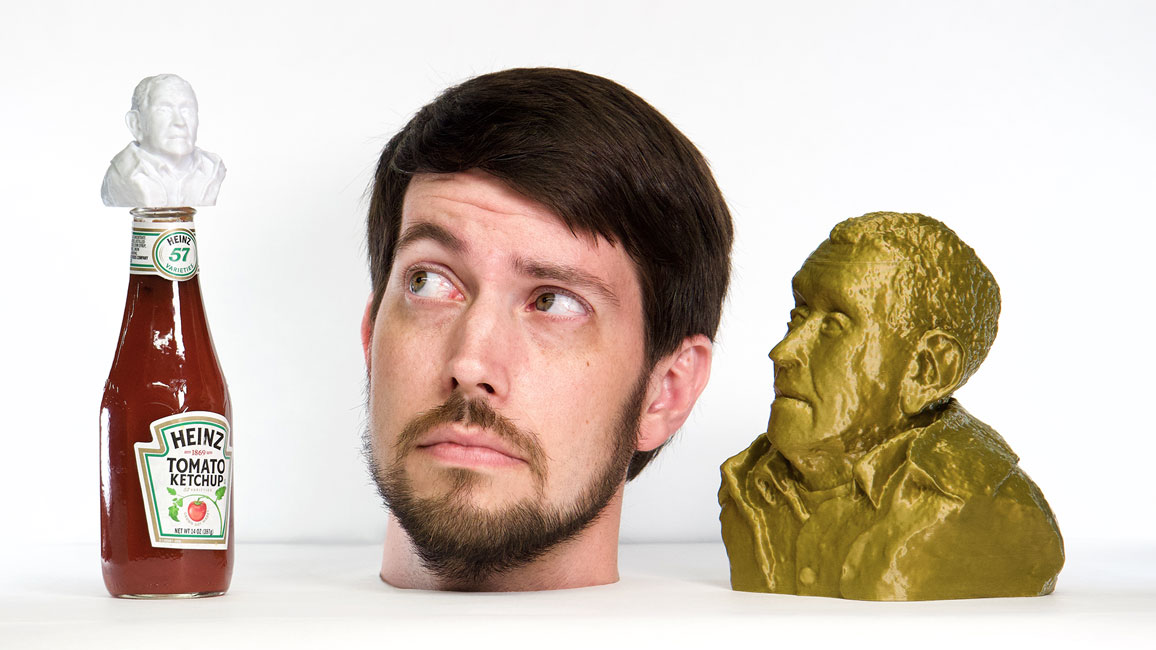 Coming into it, it seemed like some form of magic. And after generating a highly-detailed 3D model from a physical object with nothing but my camera and my laptop, it still feels like magic. But at least it’s highly deterministic magic that can be grasped.

Any Photogrammetry adventure begins with capturing photographs of a 3D object.

I could’ve set the bust on a surface and walked around taking pictures of it, relying on software to ‘clean things up’ for me.

But as a programmer, I know garbage in equals garbage out, and the cleaner the images, and the more precisely they are taken, the less work I’ll have to do later cleaning up artifacts or touching up an imprecise model—at least that’s my theory.

So I built a rotating turntable out of two round pieces of wood and a lazy susan bearing:

I set it up with a pure white background (a sheet of posterboard), and measured out 10° increments on a piece of tape I put on the DIY lazy susan, so I could rotate it precisely.

Finally, I took a series of 148 pictures, from four elevations:

I pulled those pictures into the computer, tweaked the exposure a bit so the white background was blown out a tiny bit (pure white), and had a set of 24 megapixel JPEGs ready for the photogrammetry process—over 3.5 billion pixels of data to work with!

Since I have a Mac (a 2019 16″ Macbook Pro with an i9 processor at the time), I don’t have any Nvidia CUDA cores at my disposal (locally, at least). And it seems some of the more GUI-driven photogrammetry programs (which often require CUDA cores) are Windows-only.

But I eventually found the free and cross-platform app Regard3D, and I followed the official tutorial. I was able to get a result, but the resulting 3D mesh was really messy:

You could see my Grandpa, but he seemed to be frozen in a bed of goo. It would’ve required a lot of work in Meshmixer to get a faithful reproduction of the original bust.

I sent my cousin the same set of pictures, but was also having trouble getting a good initial model.

Finally, I found this blog post on COLMAP + OpenMVS from Dr. Peter L. Falkingham. He wrote a .bat script that uses the two open source tools (on Windows, at least) to generate a 3D model from a set of images.

I needed to install COLMAP and OpenMVS, and luckily, I also found an excellent Instructable by joecooning, Free Photogrammetry on Mac OS: From Photos to 3D Models, and followed his instructions to install them:

Download the latest COLMAP-dev-mac-no-cuda.zip file from the COLMAP GitHub releases page, expand it, and place COLMAP in the Applications folder.

Use this shell script (embedded below) to run the photogrammetry process inside a directory full of images of the object you wish to turn into a 3D model:

After running the script, the new ‘model’ directory should contain a .jpg texture map image, a .mtl (material settings) file, and an .obj (3D object) file.

I imported the .obj file in the free Meshmixer app, and WOW, it was pretty much dead-on… besides the fact that the object was upside-down:

So I spent a bit of time cleaning up the bottom edges in Meshmixer, and doing a ‘plane cut’ to slice off the bottom and discard all the artifacts from the lazy susan/turntable. Then I made the object a solid (this isn’t strictly necessary for 3D printing, but it’s easier to work with in my case) and exported it.

It looks pretty amazing, even capturing some of the tiny details that the naked eye would likely miss at a glance!

Here’s one brief clip of a 3D print I made of this model (generated with Octolapse and my Nikon D700):

To see a ton more detail about the story behind this bust, and the different designs I made for my family, please watch the video.

From Zero to CTO — Mark Wood is in the spotlight…

From Zero to CTO — Mark Wood is in the spotlight…

What are NFT Royalties, and how does it Work?