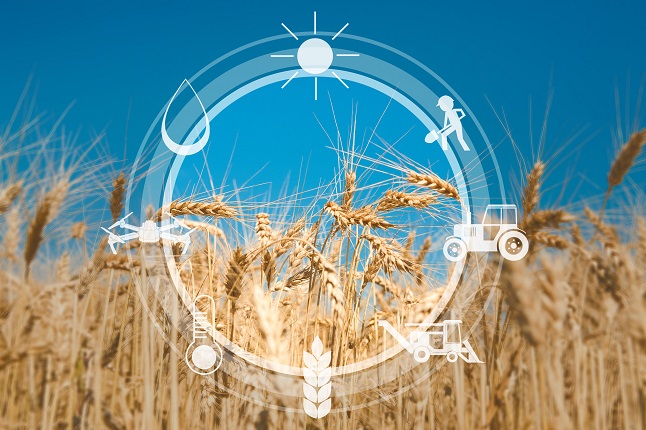 Farming has traditionally focused on maximizing yields at the lowest possible cost. But as environmental concerns have mounted and sustainability has emerged as a critical business issue, agriculture is evolving.

“We are seeing enormous advances in sustainable agriculture,” observes Vasanth Ganesan, a partner at business management consulting firm McKinsey & Company. “There is a growing recognition that farmers can achieve a significant return on investment through the technologies they use.”

In fact, McKinsey found that farmers around the world are rapidly shifting to sustainable practices. These include low-tech solutions like low-tilling or no-tilling practices and the use of cover crops to high-tech approaches involving bio-stimulants, bioengineered crops, and IoT systems.

The impact of agriculture on the world’s carbon footprint is enormous. The industry generates
about US $2.4 trillion annually and provides jobs for upwards of 1.3 billion people — about 19% of the global population. Yet, according to the United Nations, the industry also has a massive carbon footprint. About 31% of global emissions originate from the world’s agri-food systems.

Addressing this issue is a steep challenge. “There is a great deal of heterogeneity to agricultural systems around the world,” observes Miland Kandlikar, a professor at the Institute for Resources, Environment Sustainability at the University of British Columbia. “There are different economies, machinery, technology, soils, crops and other factors that come into play as you address sustainability.”

Adding to the problem is the fact that deforestation and increasingly complex supply chains are accelerating carbon output. “The most important trend … since 1990 … is the increasingly important role of food-related emissions generated outside of agricultural land, in pre- and post-production processes,” noted
Maximo Torero, an economist for the UN.

In fact, more than half of the world’s farms have adopted sustainable practices, according to research
conducted by McKinsey & Company. Connected digital sensors monitor crop growth patterns, cattle movement, microclimate data and the pH level of soil. As this data is fed into systems, farmers can adjust and adapt as needed. Analytics software and machine learning systems automatically adapt watering and the application of chemicals. Some farms and ranches have also turned to drones that use multi-spectral imagery to monitor plant health, weeds, animals and soil conditions.

Telemetry and GPS systems also play a role in reducing carbon output. These technologies monitor the location of vehicles and equipment — and optimize the way they are used. These technologies also make it possible to improve fuel usage, optimize equipment maintenance, and track animal herds. “There’s a convergence of technologies that are driving profound changes in agriculture,” Duchnowski says.

A New Era of Sustainability Emerges

For now, Ganesan says, the biggest problem is the lack of a holistic loop to address sustainability. While farmers are open to innovation, particularly through technology, they often have difficulty embracing sustainability because their suppliers — which sell seeds, chemicals, and other products — are slow to adopt lower carbon practices. “We’re seeing progress but it’s still a bit of the wild, wild west,” he says. “In many cases, there’s a lack of coordination within industries and by governments.”

There are some encouraging signs, however. For instance, in February 2022, the United States Department of Agriculture announced that it is investing US $1 billion in companies in order to reduce greenhouse gas emissions and fuel innovation related to climate-based technologies. Ganesan believes that the agricultural industry has only scratched the surface about what’s possible with precision technology and analytics. “A key is to develop technologies that not only drive improvements but also create value for farmers. This will accelerate sustainability,” he notes.

Biotechnology could also play a key role in establishing a more sustainable framework for agriculture. Over the last few decades, more resilient seeds and plants have become commonplace through genetic engineering. Yet the impact of CRISPR, a powerful gene editing tool, could prove revolutionary. It will likely allow scientists to engineer crops that are better adapted for extreme conditions — and boost yields.

Yet, technology alone can’t solve the problem, Kandlikar argues. There’s also a need for behavioral changes. “If we want to promote sustainability in a real way it isn’t enough to simply become more efficient at growing crops and raising animals and then have the gains offset by greater demand. There’s a need to view everything through the lens of sustainability.”

This includes viewing Scope 3 emissions more granularly. There’s a need to trim food waste — which, according to the UN comprises 14% of all food that’s harvested and expands the carbon footprint through wasted water, labor and energy. In addition, society must make some tough choices about what foods it consumes and how the foods are produced. For example, beef, chocolate, and coffee produce greenhouse gases at a rate ranging from 20x to 100x higher per kilogram than most field crops.

It’s also easy to overlook the fact that agriculture’s carbon footprint extends far beyond food products. Today, it touches many industries — ranging from aviation and textiles to product packaging and paper goods. What’s more, as companies adopt synthetic fuels, plant-based soft drink containers, and alternative types of clothing, there’s a need for business and IT executives to understand their impact and play a role in promoting further carbon reduction goals.

The vast majority of the world’s farmers are receptive to innovation and more sustainable practices, Ganesan says. “The toolkit exists, and it is getting better all the time. We have to find ways to use technology, tax incentives, and other tools to promote sustainable practices in a more holistic way — and deliver incentives to farmers and the companies that produce our food.”

Reining in the Risks of Sustainable Sourcing

9 dark secrets of the federated web

9 dark secrets of the federated web