I love my GPD Micro PC 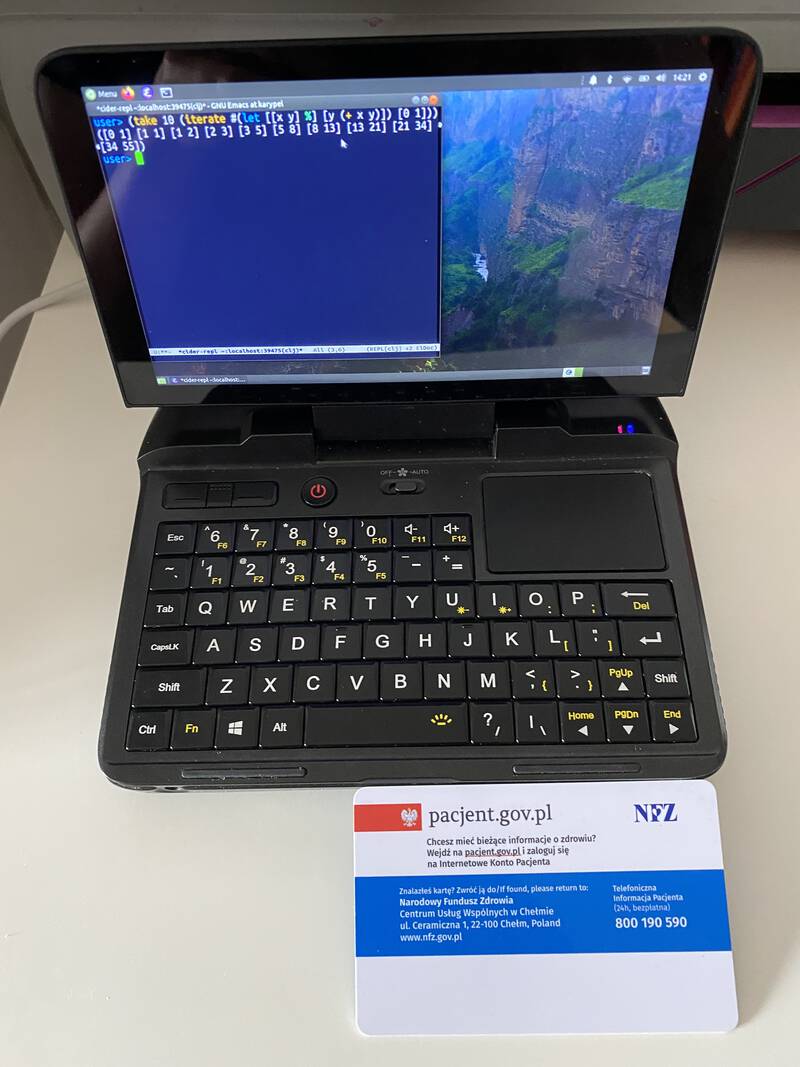 I bought two computers this year: a beefy Macbook Pro with M1 Pro and a GPD Micro PC.

The MBP is meant to be my mobile workstation, to satisfy all my needs whenever I need to work outside of my home office (at home, I’m still mostly using a two-year-old Intel-based Mac Mini). The GPD was a caprice. Perhaps I’m at the stage in life when well-off men buy themselves Ferraris to fend off a mid-life crisis; or perhaps I just have a separate heart for small computers.

Guess which of these two I find myself using more? That’s right, the GPD Micro. Granted, I’ve only had it for a month, so it may be a novelty effect that’ll wane over time, but still: I’m impressed. And, yes, I’ve installed Ubuntu MATE (a semi-official distro that has dedicated builds for this hardware) and Emacs on it, and I program on it.

So what do I like about it? Why would I reach out more for a device that has sub-par performance, a screen that you have to squint to notice anything on, and an uncomfortable keyboard?

It’s ultra-portable. It resides permanently in my waist bag (a.k.a. fanny pack for my American readers) alongside my wallet and phone, and I carry it around everywhere when I’m out and about. It’s super lightweight for a laptop (I hardly feel the extra grams), and reaching for it only takes a second or so, as does putting it away.

It’s cheap and sturdy. I’m very vigilant and still a bit freaked out when I carry the Macbook around. Careful in tight spaces! Better not hop on a city bike with it in my backpack, ’cause what if I fall?

In contrast, the Micro doesn’t mind to be worn or battered. In many ways, it reminds me of the Eee PC 1000HE that used to be my main driver years ago. (Did I mention having a separate heart for small computers?) If it breaks, it breaks; but who knows! I once accidentally dropped the Eee from ~1 metre of height, chipping off some of the chassis plastic, but the computer continued to work. I wouldn’t be surprised if the Micro turns out to be just as resilient.

Having a hacking environment at all times feels very empowering. This is something I hadn’t anticipated at all. I like long, solitary walks, letting my mind wander; when I feel like thinking about code, I will sometimes stop for a coffee and experiment. And if I don’t, the very thought of having a dev environment always within reach makes me feel inspired.

My hands in my pockets, and my pockets like an ocean,
I slowly walk and look around

Similarly on the underground: rather than mindlessly reaching for the phone and scrolling through news, I choose to pull out the Micro and read some code. I very deliberately am not logged into any social media there, do not do any work on it (just hacking on personal projects for fun), and remain offline unless I really need something from the Net.

It dual-boots Windows and Linux and is my only x86-64 computer. I like many things about macOS and the Apple ecosystem, but the walled garden of Apple still irks me. It’s good to have an escape hatch to the more open world of Linux (I’m hesitant of trying out Asahi on the Mac) and be able to play an occassional Windows game.

Finally, this little thing has a soul. Like the Eee; like the 8-bit micros of yore. I don’t know how better to put it. The Macbook Pro is a very capable workhorse, but I think of it as just a tool. In contrast, the GPD just wants to be used, interacted with, tinkered with. Someday I’ll find a use for its RS-232 serial port!

Organisational Design – How Titles Can Make a Difference

Organisational Design - How Titles Can Make a Difference